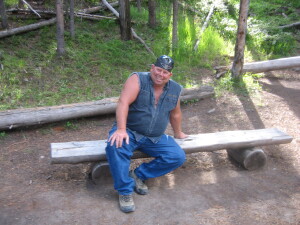 Timothy "Tim" Allen Keck, 64, of Summerville, passed away on the evening of Saturday, the 11th of September, 2021. He left peacefully, surrounded by family, in his own home, following a brief period of declining health.

Born September 8, 1957 in Brookville, he was the firstborn son of the late Robert Allen Keck and Lela Mae Keck. He graduated from Brookville High School. More often, however, he considered himself a lifelong student of what he affectionately called the "Keck School of Life".

When not dedicating himself to testifying of his love for and faith in God and the testaments of the Bible, Tim relished in many pastimes, things like: relaxing on a beach in Mexico, boating on the river, dining out with family and friends, riding his motorcycle across the country, concerts with his children, pranking and teasing anyone, or feeling the bleachers rumble at tractor pulls. Those said, everything that he enjoyed, he cherished them the most when those moments were shared.

Throughout his life, Tim worked and worked hard, from lumber to natural gas to his goal of mining coal in his own permits. He served his passions for working with his hands just as strongly and fervently as he did God. There was pride and wisdom in each and everything he fought to accomplish. Nothing mattered more to him than attributing that success to God and the support of his family. Survived by his daughters Maura Keck, Erika Keck, and Hannah (Benjamin) Keck-Crawford; his brother Shawn Keck; his sisters Pamela Ruffner, Sherry Keck and Colleen (Brent) Kiehl, in addition to many other family members of numerous connections, as family to him was more than blood. His absence will be felt for much time to come.

Tim was preceded in death by his sister, Crystal Keck.

To send flowers to the family or plant a tree in memory of Timothy Keck, please visit our floral store.

You can still show your support by sending flowers directly to the family, or by planting a memorial tree in the memory of Timothy Keck
Share a memory
© 2021 Furlong Funeral Home. All Rights Reserved. Funeral Home website by CFS & TA | Terms of Use | Privacy Policy